31 Then Jesus left the vicinity of Tyre and went through Sidon, down to the Sea of Galilee and into the region of the Decapolis. 32 There some people brought to him a man who was deaf and could hardly talk, and they begged Jesus to place his hand on him.

33 After he took him aside, away from the crowd, Jesus put his fingers into the man’s ears. Then he spit and touched the man’s tongue. 34 He looked up to heaven and with a deep sigh said to him, “Ephphatha!” (which means “Be opened!”). 35 At this, the man’s ears were opened, his tongue was loosened and he began to speak plainly.

36 Jesus commanded them not to tell anyone. But the more he did so, the more they kept talking about it. 37 People were overwhelmed with amazement. “He has done everything well,” they said. “He even makes the deaf hear and the mute speak.”
(Mark 7:31-37 NIV)

Today’s text finds Jesus and His disciples on the move again.  In yesterday’s passage, Jesus traveled from the northwest side of the Sea of Galilee (presumably from around Capernaum) 40 miles northwest to Tyre, on the coast of the Mediterranean Sea.

In today’s text, we see Jesus and His disciples go north to Sidon, then all the way back down to the southeastern side of The Sea of Galilee, to the ten-city region called The Decapolis. 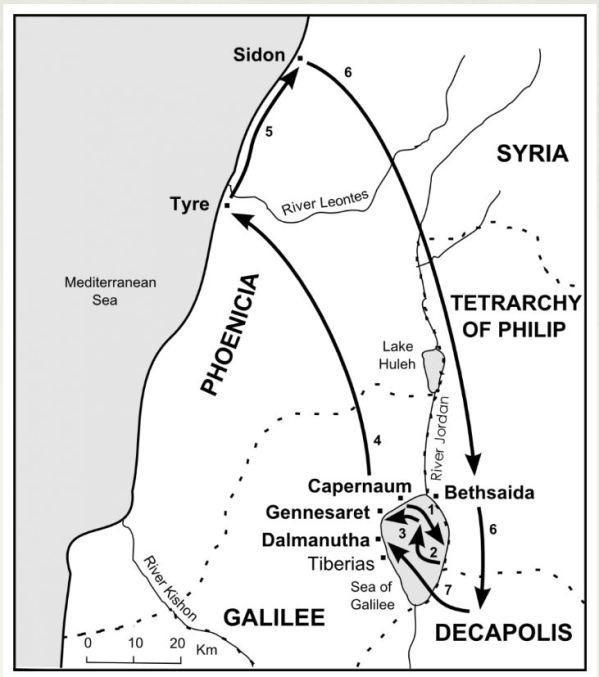 As you can see on the map above, this journey definitely qualifies as a “road trip”.  This journey likely took several months to complete.  Mark does not identify the timeframe, but since Jesus and His disciples were on foot, and Jesus likely stopped and ministered on His journey, the journey could have easily taken from 6 to 9 months.

This was likely some time for Jesus to spend alone with His disciples, teaching them and preparing them for what was to come.  As we have seen in our journey through Mark so far, any time that Jesus was in or around the region of Galilee, they were swamped by crowds seeking healing, exorcism of demons, and hungry for His teaching.

When Jesus arrived in The Decapolis region, some people brought Jesus a deaf man with a speech impediment.  The man’s friends begged Jesus to heal the man.

In this story, we see Jesus’ compassion and kindness toward this man.  Jesus takes the man and his friends aside and works with them privately.  Part of the reason Jesus dealt with this man privately was because of the crowds; the other part was likely because this man had not been in this condition all his life.  Something in this man’s life had triggered his loss of hearing and greatly impeded his ability to speak.  If you or I were in this man’s shoes, we would also likely be sensitive and embarrassed at our ability to hear or speak.

Jesus puts His fingers in the man’s ears, then spits on His finger and touches it to the man’s tongue.  Jesus looked to heaven, asking the Father’s help, then sighed deeply and spoke to the man’s condition.  Mark records that Jesus spoke in His native Aramaic, saying  “Ephphatha!” (which means “Be opened!”).

Jesus’ deep sigh was not of weariness, boredom, or self-righteousness, but of empathy and deep love for this man and all he had been through.  Jesus recognized the deep pain this man had in not being able to hear or communicate.  Jesus restored his ability to both hear and speak.

Jesus commanded the man and his friends to keep this to themselves, to keep silent.  But they were so overjoyed they told anyone who would listen about what Jesus had done.

In this miracle, we see one of Isaiah’s prophecies fulfilled:

5 Then will the eyes of the blind be opened
and the ears of the deaf unstopped.
(Isiah 35:5 NIV)

May we once again see the compassion and care that Jesus had for the broken and hurting world around Him.

May we have the same selflessness and care for others, showing them the love of the Savior as our paths cross.  Sometimes a smile, a kind word, a handshake, or a hug are all the healing a weary soul needs to see and experience the love of Jesus.

Will you take the challenge and opportunity to encourage someone today?